NSW Police and RMS believe their safety message is getting through to the trucking industry.

With this year’s Operation Austrans nearing the halfway mark, New South Wales authorities have brandished a bouquet to the industry rather than a brickbat.

At the end of the second week, the NSW Police assistant commissioner John Hartley pointed to compliance improvements following an action at a cold-storage distribution centre in western Sydney in which 89 trucks and trailers were inspected.

"There are good initial signs of improved levels of compliance," Wells says.

"Some issues were identified around loading and roadworthiness, but the general level of compliance showed our message is getting through and responsible off-road parties in the logistic cold-storage sector have got the message; they have lifted their game and are more focused on their own compliance levels."

One major and nine minor defects were applied to 10 trucks for 36 issues affecting body chassis, ancillary equipment, wheels and tyres, steering, oil and fuel leaks, suspension, and other matters.

Officers also conducted 33 breath and drug tests on drivers, with no positive results.

Ten engine control module downloads were also conducted, with one truck defected as the module could not give a proper reading.

In addition, officers also directed three outbound loads to return to the dock for correction.

"Given the importance and the frequency of cold storage and distribution, which goes all throughout NSW, correct load management is critical on our roads," Hartley says.

"The challenge for industry is making sure those trucks and drivers that either drop off or collect goods are compliant and able to carry out that task."

It was not all positive, though, with an operation on Thursday confirming the need for load restraint vigilance.

Officers identified a truck carrying a shipping container at Botany with 24 tonnes of coiled steel cable that was found to be unrestrained.

At Linden, officers conducted an engine control module download on a truck. It was allegedly found to have a maximum speed of 159.1km/h and carrying a load that was found to be over dimension.

During this time, officers also intercepted a truck driven by a 36-year-old female driver, who was allegedly found not to be carrying a work diary, had committed a critical fatigue offence, returned a positive result to a drug test, and was found to be in possession of drugs and associated paraphernalia.

"We continue to be very clear with our message to boardroom directors, distribution-centre managers, and all sectors of the logistics supply chain – parties that forward or receive goods must take charge of their responsibilities and ensure trucks are safely loaded and properly restrained," Wells says.

"This is critical for the safety of your own staff and anyone using our roads.

"Fatigued drivers, speeding and drug use must be eliminated to minimise the risks to other road users." 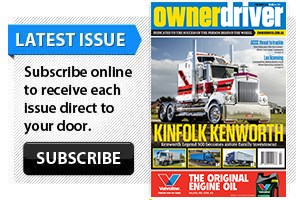