Truckstop of the Month: BP Beresfield

The BP Beresfield truckstop is one of the BP’s busiest sites in Australia.

Apart from its truckie friendly facilities, the BP Beresfield Truckstop is popular and busy around the clock due to its proximity to two of New South Wales’ major highways.

Situated at the end of the M1 from Sydney, and a stone’s throw from the New England Highway, the BP Beresfield is also a short drive from the new Hunter Expressway.

For the past 16 years, site manager Denise Jeffery has observed the passing parade of truck traffic. She has outstayed the majority of commercial vehicle drivers who have traversed the well trafficked route.

Denise was recruited to manage the site when it was built 16 years ago. The cafe was opened 12 months later, and in another four years it was rebranded as one of BP’s trademark national truckstop sites.

"I love the communication with people, and the challenge."

In keeping with the fuel company’s network of truckstops, the 24/7 BP Beresfield has a separate truckies’ room with television, seven individual showers with basin and toilet, plus laundry and drying facilities.

"You nearly see the same guys all the time, so you get to know them," Denise says of the truck drivers who stop in.

She says there are only "one or two" regulars who are still around from the early days.

"They don’t stay in the job very long."

"It’s a hard life. But you’ve got to take your hat off to them; they’re away from their families for so long."

You can read the full story in August edition of Owner//Driver magazine.

Denise Jeffery has seen many truck drivers pass through Beresfield. "You’ve got to take your hat off to them; they’re away from their families for so long." 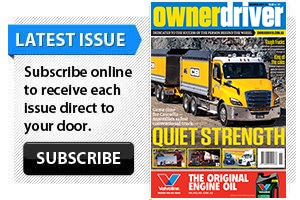