Having calmed down a little, Scotty Douglas contemplates what brings him back day after day

I idle down the main street of town, the rumble of the engine bounces off shop windows, now dark and closed for the night. I blip the throttle and drop down into bottom ‘box as I approach the pub, ready to hang a right.

There’s a crowd of guys and girls hanging outside the pub. Under a blue swirl of tobacco smoke they give me a cheer and a wave as I swing right, two trailers following me around the corner, and then I put the boot into it, twin stacks cackling in the evening air.

I give them a quick blast of the air horns before changing back up into high range. Revs climbing slowly as the drive wheels grab the blacktop and haul.

It’s a long drag up past the sale yards, out of town and into the night. The orange sodium glow of town fades slowly in the mirrors.

It’s a great night to be on the road. A Goldilocks night that’s just right.

The air is cool enough to make the big 16-litre crack along, 62 tonnes of steel, fiberglass and dairy product winding through the forest; the urban madness of freeways and traffic lights hours away in another universe.

An impatient universe filled with anger, frustration and stop-go tedium. Out here the headlights play across the trunks of old gum trees and the glowing eyes of animals scurrying out view. An ancient landscape shrouded in darkness.

A truck suddenly appears at the back doors, all clearance lights and bling, it’s an empty log jinker with the trailer folded onto its back. I raise him on the radio and call him around, we have a bit of a yarn as his 550hp sports car disappears into the darkness.

The truck is pulling like a Trojan thundering as fuel and air meet, compressing and exploding, every gear change is spot on as I climb and descend, the jake growling; heavy metal thunder with the white lines keeping the beat.

It’s on nights like this you remember what drew you to trucking in the first place. And it’s got nothing to do with bad country music songs.

On a night like this you wouldn’t be anywhere else.

I’ve driven well over 3.5 million kilometres in trucks. That’s a conservative figure but it’s nothing compared to what most drivers will do over a working lifetime. But even that meager figure is still equal to driving around the globe 860 times.

Was every kilometre of that miserable? I’m as guilty of ranting and complaining as the next person.

But no, the negativity that pervades this industry soon clouds what drew us to a life behind the wheel in the first place.

Looking back, the kaleidoscope mind throws up myriad images and sounds from the past, a dancing tacho needle, a climbing pyro gauge, the wheel of a wrecked car turning slowly in the grass, the howl of an engine brake while descending a range.

There are moments when being behind the wheel can feel like both the best and the worst job in the world; the ozone tang of approaching rain carried on the wind through an open driver’s window, mist rising like smoke in the frosty dawn. Then death and destruction, it maybe someone you know. It may be a faceless smash on a Riverina back road.

"If I have to explain, you wouldn’t understand."

In the back of my mind a UHF radio crackles with banter, obscenity and sage advice. A spilled diesel smudge amidst the skid marks on a lonely midnight highway.

But there are nights when there is a kind of magic in the air, a sense of being in the landscape rather than merely rolling on the surface. Those nights where a fat yellow moon that seems almost close enough to touch lumbers over the edge of the Hay plain giving the scrub an unearthly glow.

Nights when the cold blanket of starlight is broken by meteorites streaking into the atmosphere; alien minerals burning green against the inky blackness.

Violent inland thunder storms on the horizon that boil with red and orange incandescence before dumping their load of wet outback dust across the windscreen.

Lightning striking the Armco barriers, etching an electric outline against the dark that burns into the retinas.

The air streaming through the open drivers’ window left heavy with the heady smell of eucalyptus and peppercorn after the storms passing.

This is all at odds with the number crunchers, nuts and bolts and enforcement regimes.

How do you explain that allure to someone that sits in an office or sees you as a menace to society? Or perhaps as a cash cow for state coffers? You either get it or you don’t.

You can have your stereotype of the typical driver if you like. But I’ve encountered more breathtaking vistas and seen more beauty from behind the wheel than I have on the inter-web.

Call it a wank even, but on the good trips, there can be a diesel-fuelled poetry in the air. And buggered if I’m going to shy away from it.

We’ve seen more sunsets and sunrises than most people can contemplate.

We know what the Pilliga looks like under moonlight as the forest flickers on the edge of the headlight beams, every shadow a ghost of the long departed Princess; a spectre still wanting a ride.

We’ve seen the outback dawns, inland frosts and driven through floods and bushfires, seen smoke tint the horizon or a storm light flare on a flooded river.

We see the country from a vantage point that no one else does. The tick tock of commerce keeps on ticking like an odometer, marking time and distance, value and growth.

Life on the road doesn’t play by those rules, there’s more to it than that, it’s fluid that ebbs and flows.

As many have said in the past; "if I have to explain, you wouldn’t understand."

Sign up to receive the Owner Driver e-newsletter, digital magazine and other offers we choose to share with you straight to your inbox 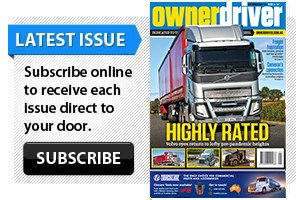